Some time ago, I saw some funny pictures appear on Twitter. It looked a bit like GitHub's contributions, but over a single week?

I finally figured out what it was and discovered WORDLE, a new word game, a kind of cross between Mastermind and Hangman, created by Josh Wardle. Wordle / Wardle: clever!

So of course, I played too, or rather I tried to play... Because I quickly had to admit that my English vocabulary was not enough to win regularly. Although I'm proud to follow series or movies in VO with English subtitles! Or maybe I have a big problem when it comes to 5 letter English words?

2 or 3 years ago, I had collected some French word lists to write a program that would allow me to optimize my Scrabble level (or cheat, if you want). In the end, I had never programmed anything.

But this weekend, after getting up at dawn around 10am, I went for it! And just after midnight, I had already code something pretty good that I was able to put online on my solitaire games site: https://www.solitaire-play.com/lemot/. I was very happy because I didn't just adapt Josh Wardle's code, but I wrote my own version in Vanilla JS. And on top of that, I had come up with a great name: "LeMOT". WORD-Le => Le-WORD => Le-MOT !

And I even had an idea for a slogan to complete the title: "One Word, One Day", inspired by the french TV show "One Book, One Day".

After that I went to sleep and the next day I just kept going and made a lot of improvements.

This kept me busy until early afternoon. I didn't get back to it until the evening, to properly handle the color clues when there are duplicate letters, either in the word to guess or in the answers entered.

It was a lot of fun to do and no doubt I will continue to work on it.

Already, I have at least a couple of things to do to get my game right.

Then there are a few things to add to try to reproduce the original game's features as well as possible.

Another interesting task will be to limit the list of words offered as guesses. In the original version, Josh Wardle selected only 20% of the 12500 English 5-letter words to be among the happy few to guess. I'm not sure why he did this, and on what criteria. Probably their frequency of use. So, how can I do this in French?

In the meantime, feel free to test your French vocabulary on LeMOT - Un jeu de mot chaque jour, to see if you can do better than me! 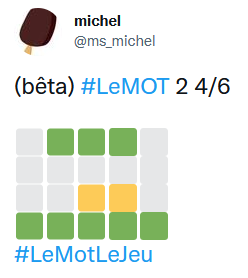